Answers to your questions

Email us for more info

How to join the team 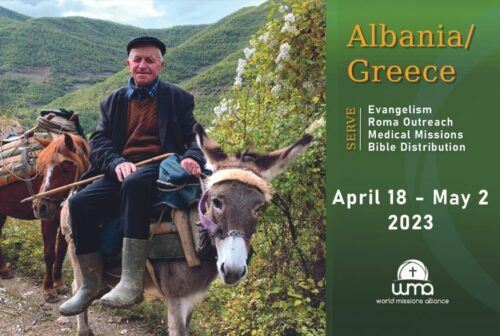 ABOUT THE TRIP (read more)

Albania was first a catholic country due to the Roman’s invasion, but in the 15th century after the Ottoman invasion it became Muslim. Since it shares a border in the south with Greece, many inhabitants of these areas are orthodox. From the end of the 1960s practicing a religion was forbidden by the communist regime. It was after the fall of this regime that the Albanians started to practice religion again.

April 18 through May 2 will be an extended mission combining evangelism and medical missions in Tirana, Albania and Thessaloniki, Greece. We’ll be returning to Albania to continue the work we began in 2021.

It is not a coincidence that the foundations of Christian faith in both nations were laid by the Apostle Paul. When Apostle Paul evangelized Europe, travelling westward on the Via Egnatia he preached at Thessalonica, the largest city on this great highway. This became the center from which Christianity radiated to Athens and Corinth, also to the province of Illyricum. Paul’s missionary journeys followed Roman highways, and along them extended the chain of early churches.  A trip of 150 miles along the Egnatian highway from Thessalonica westward would penetrate to the heart of Albania.

Though Albania is a Muslim country today, it is a safe place to share the Gospel.

The evangelical church in Albania is just 0.5% of the population. Many people have not heard of Jesus and the local churches need help to spread the Good News.

Our mission will focus on the most underprivileged communities, the Roma people, the Egyptian minorities, and the poor Albanian families from the North.

During the outreach you will share testimonies of how Jesus impacted your life, help distribute food and other supplies, assist in the medical clinic, pray for people, distribute Bibles and Gospel tracts, engage youth and children in activities that will introduce them to the Gospel message and many other opportunities to show the love of Christ.

The medical clinic is a great way to attract people who are intimidated by the idea of church. We need medical and non-medical professionals to assist in the clinic.

Our work in Albania will be mostly in the capital city of Tirana, but we will also visit some of the surrounding cities.

From Albania we will travel to Thessaloniki with a stop in Meteora, one of the most unique and mysterious rock formations in Greece where in the 11th century AD monks made their dwellings in the caves and later a complex of monasteries was built.

The ministry in Thessaloniki will also focus on the Roma communities, many of whom moved to Greece from Albania.

Since May WMA has partnered with the Albanian churches in the child sponsorship program, to provide a better quality of life and education for the children from underprivileged communities. Our work will be helping further and solidify this work.

Through medical missions, orphanage support and partnership with local churches we have an unprecedented opportunity to safely share the love of Christ in Albania and Greece!

These are the ministry opportunities you will have.

Your invitation to Albania and Greece from WMA Founder and President Chuck Todd:

WE ARE LOOKING FOR GENUINE NOT PERFECT

As a ministry, our desire is to give you an opportunity to fulfill your unique part in the Great Commission regardless of gender, age, race or social status. We accept applicants from all stages in their spiritual walk with Christ. Our mission teams represent beautiful diversity. Each team member is handpicked by God to play a uniquely designed role in the ministry.

Have you ever felt like a mallard duck in a pond of graceful swans? Every one of us has experienced a moment or even a season in life when we felt like we didn’t belong. Belonging is the innate human desire that makes us feel complete and fulfilled.

At the root of it is the need to be a part of something larger than us – a community, a cause, a movement.

We yearn to have a tribe and yet this most basic and profound desire is a lot of times unrealized because often we try to change ourselves to fit in instead of embracing who we are and connecting with those who will value us.

This is why being plugged into World Missions Alliance community is a cherished benefit of doing missions work. Serving Christ, overcoming challenges and celebrating victories together creates lifelong friendships.

As a ministry, our desire is to give you an opportunity to fulfill your unique part in the Great Commission regardless of gender, age, race or social status. We accept applicants from all stages in their spiritual walk with Christ. Our mission teams represent beautiful diversity. Each team member is handpicked by God to play a uniquely designed role in the ministry.

Without you, a piece to the puzzle is missing. The beautiful tapestry God weaves together is incomplete without you. Each of us was created to reflect a particular part of the image of God. So, without you, we miss out on knowing and experiencing God better.

It’s time to be celebrated as a unique and irreplaceable part of the Body of Christ!

KNOW BEFORE YOU GO

Are you considering a short-term mission trip in 2020 or 2021? World Missions Alliance offers a variety of affordable mission trips to give you a chance to fulfill your call to the Great Commission...

Are you considering a short-term mission trip in 2020 or 2021? World Missions Alliance has a variety of affordable mission trips to fulfill your call to the Great Commission where you can offer your talents and experience to help others. Mission trips are available throughout the year, so you can choose a nation close to your heart or a volunteer projects, including evangelism, youth ministry, women’s ministry, leadership training, medical missions or refugee support projects. In addition to facilitating international Christian missions, we have opportunities for college students looking for internships and student groups looking for an affordable way to go on a mission trip in summer, winter, spring or fall.

World Missions Alliance works with indigenous churches and ministries in more than 27 different destinations, including Africa, Asia, Latin America, Europe, the Middle East and Africa. Since 1999, World Missions Alliance has helped impacted millions of people around the world with the Gospel message and has helped thousands of people in the US, Canada and other countries volunteer their time and talents for the cause of Christ

As missionaries we learn what it means to live and serve in different places. JoAnne Wolf, a registered nurse from TX, after being on several mission trips with World Missions Alliance said: “No words can describe the blessing I received from going…Can’t wait for the next one!”

Once you have completed your mission journey, your testimony shared in your church family and among friends continues the Great Commission in your own country!

The only requirements to join a mission trip with World Missions Alliance are – 1. Filling out the application form; 2. Submitting a letter of recommendation from your pastor, ministry leader or a spiritual mentor.  Once you have been approved, you can join a mission team any time God calls you to go!

If you are interested in a mission trip, please contact our home office to find out what trips and outreaches are available or check out our website for more information. World Missions Alliance has many opportunities for doctors and nurses and other medical professionals who want to serve the underprivileged. Take a look at our mission itinerary here https://rfwma.org/project-medical-missions/ and contact us if you are interested in participating in one of these trips.

A short-term mission trip with World Missions Alliance is a unique experience with a well-planned schedule, good conditions and a group of like-minded individuals who prioritize the Great Commission.

“I did not think that I can make a difference in someone life.

I am so blessed to have been a part of your team. You and Helen are genuine in your love for God, serving people, and the interest you demonstrate to each of the team members. I saw love and learned what true love is through your ministry.

Being an introvert, this was a little difficult for me to be able to come out and step in faith to do what God put in my heart. Especially when I had to go in front of the congregation and talk about my testimony, but I am so glad that I did. This was the best mission trip I traveled and pray it will not be the last. God has been blessing me above my expectations. I cannot wait until the next mission trip.

Chose one or more mission opportunities. Fill out the interest form to let us know you’re interested. Receive an instant free download of our e-book “Five Steps to Plan a Successful Mission Trip” 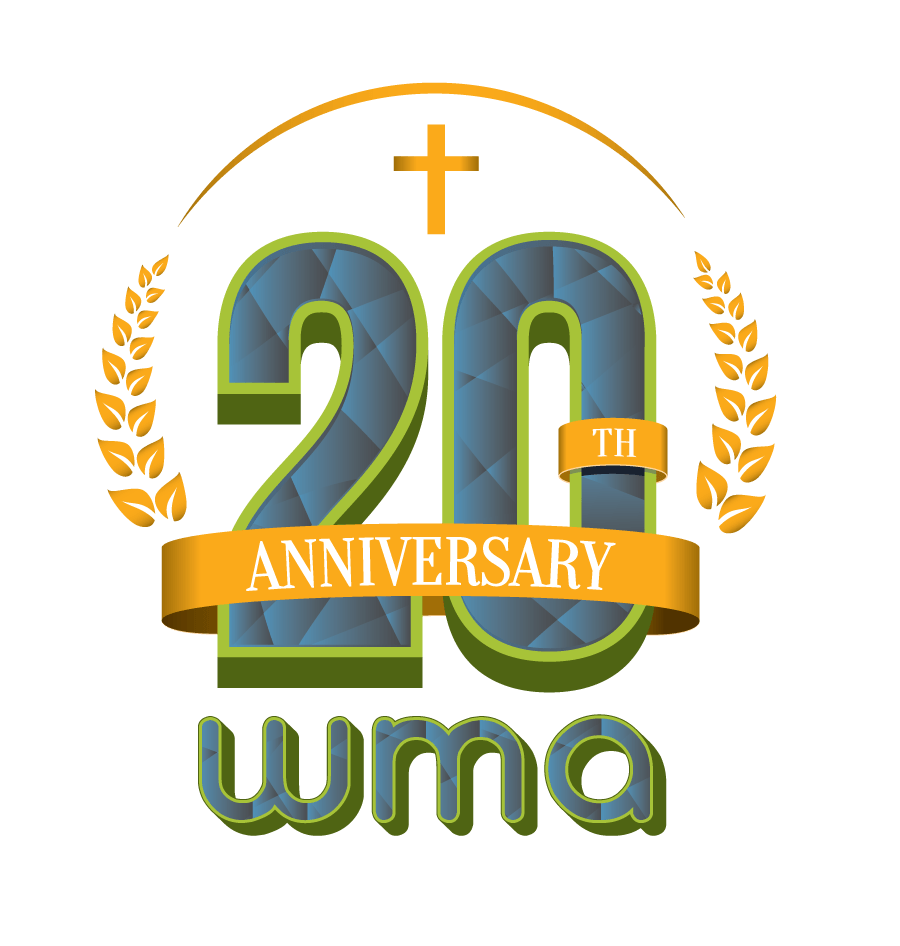 Over 21 Years Fulfilling the Great Commission

Over 4,000 people have traveled to 29 countries on over 200 life changing mission trips.

If your life has been changed by Jesus I think you will enjoy our new podcast series “Changed Lives Change Lives”. We invite you to listen as our guests share of the encounters with Christ that changed their lives forever and how that now compels them to help others.
Listen Now

TRAVEL OF PASSION AND PURPOSE: WHY WE MUST GO?